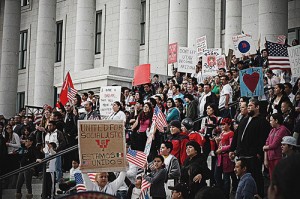 In Villas at Parkside Partners v. City of Farmers Branch, the Fifth Circuit struck down an ordinance imposing a licensing scheme that prevents noncitizens from renting homes. The court released its en banc determination on July 22, 2013.

Relying on the Supreme Court’s decision Arizona v. United States, Judge Higginson’s lead opinion determined that the ordinance’s criminal and penalty provisions fall on “conflict preemption” grounds, and the remainder of the ordinance could not be severed.

While a federal law, 8 U.S.C. § 1324(a)(1)(A)(iii), prevents the harboring of non-citizens, the ordinance goes further: it criminalizes the mere renting of an apartment. In Judge Higginson’s view, the ordinance puts local officials in the “impermissible position of arresting and detaining persons based on their immigration status without federal direction and supervision.” The opinion explained that the federal SAVE program on which the City planned to rely would provide only a non-citizen’s “immigration status.” It would not answer the ordinance’s key question: “lawful presence.” The opinion also ruled that the ordinance would improperly allow a state court to assess the legality of a non-citizen’s presence without a definitive federal determination.

Other opinions from the en banc court would have preempted the ordinance on broader grounds, including because it is incompatible with the federal government’s authority in the field.

Notably, however, five judges would have upheld the ordinance.

Four days after the Fifth Circuit decided Farmers Branch, the Third Circuit applied similar reasoning to strike down the City of Hazelton’s ordinances that prohibit employment of and leasing of housing to unauthorized aliens.

In Lozano v. Hazelton, the court ruled that the City’s housing licensing scheme is field preempted. Quoting the Eleventh Circuit, the court found that the federal government “has clearly expressed more than a `peripheral concern’ with the entry, movement, and residence of aliens within the United States and the breadth of these laws illustrates an overwhelmingly dominant federal interest in the field.”

The court also ruled that the scheme is conflict preempted:

[T]he housing provisions constitute an attempt to unilaterally attach additional consequences to a person’s immigration status with no regard for the federal scheme, federal enforcement priorities, or the discretion Congress vested in the Attorney General. Congress has not banned persons who lack lawful status or proper documentation from obtaining rental or any other type of housing in the United States. Hazleton’s decision to impose this “distinct, unusual and extraordinary burden[] . . . upon aliens” impermissibly intrudes into the realm of federal authority

Less than a month earlier, however, the Eighth Circuit reached the opposite conclusion. In Keller v. City of Fremont, the court upheld a similar housing scheme adopted by the City of Fremont.

The court squarely rejected the view that federal law occupied this field:

Laws designed to deter, or even prohibit, unlawfully present aliens from residing within a particular locality are not tantamount to immigration laws establishing who may enter or remain in the country. Indeed, Plaintiffs’ expansive notion of constitutional and field preemption is contrary to decisions of the Supreme Court expressly recognizing that a State may enact an otherwise valid law that deters unlawfully present aliens from residing within the State, notwithstanding the federal government’s exclusive power in controlling the nation’s borders.

The court also refused to find that, at least in this facial challenge, the ordinance was conflict preempted:

[T]he rental provisions do not require local officials to determine whether an alien is removable from the United States — a determination that involves “significant complexities.” . . . Indeed, the rental provisions expressly require City officials to defer to the federal government’s determination of whether an alien renter is unlawfully present

These decisions show that regulating illegal immigration issues at the local level, while not necessarily forbidden, is fraught with risk.