For those of you who have been following Peruta v. City of San Diego, the multi-year battle over restrictions on the concealed-carry permits, yesterday the Ninth Circuit issued its long awaited en banc Opinion.   END_OF_DOCUMENT_TOKEN_TO_BE_REPLACED

In a per curiam (unauthored) opinion, which concurring Justices Alito and Thomas call “grudging,” the U.S. Supreme Court has ordered the Supreme Judicial Court of Massachusetts to decide again whether Massachusetts’s stun gun ban is constitutional. Currently eight states and a handful of cities and counties ban stun guns.

The highest state court in Massachusetts held that the Second Amendment doesn’t protect stun guns because they weren’t in common use at the time the Second Amendment was enacted, they are “unusual” as “a thoroughly modern invention,” and they aren’t readily adaptable for use in the military. END_OF_DOCUMENT_TOKEN_TO_BE_REPLACED

Every year the Supreme Court refuses to hear thousands of cases. A denial of certiorari does not mean the Court agrees with the lower court decision. So most cert denials go unnoticed.

That said, many eyebrows were raised for many reasons when the Court denied cert in Friedman v. City of Highland Park. The issue in the case was whether the City of Highland Park could ban assault weapons and large capacity magazines.  END_OF_DOCUMENT_TOKEN_TO_BE_REPLACED

For those of you closely following the concealed-weapons permit case, Peruta v. San Diego, the Ninth Circuit has set en banc rehearing for June 16, 3:30 pm, in San Francisco.  As anticipated, amici briefs have poured in; all are available on the Ninth Circuit’s website.

Quick update for those of you following the hotly contested Second Amendment case Peruta v. County of San Diego.  Yesterday, the Ninth Circuit agreed to an en banc rehearing.  The Court will take up the issue of whether San Diego County’s “good cause” permitting requirement, governing concealed weapons permits, impermissibly infringes on the Second Amendment right to bear arms.  The California Attorney General and other groups brought petitions for rehearing after unsuccessfully attempting to intervene in the case last year when the San Diego Sheriff opted not to seek rehearing of the original Opinion, authored by Judge O’Scannlain, and joined by Judge Callahan, with a dissent by Judge Thomas.

The Second Amendment confers an individual right to keep and bear arms. 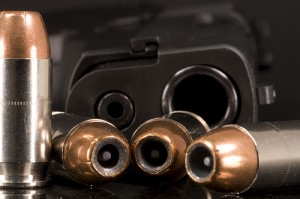 We know that now—after decades of uncertainty—because the Supreme Court said so in District of Columbia v. Heller, 554 U.S. 570 (2008).

But how far does the Second Amendment extend? Does it prevent a City from regulating the storage of handguns in homes or the sale of ammunition that expands upon impact, referrred to as hollow-point bullets?

What exactly was at issue and how did the court reach its conclusions? END_OF_DOCUMENT_TOKEN_TO_BE_REPLACED