The challengers to the redistricting of Maryland’s Sixth Congressional District just might win—if the Supreme Court actually decides their case.

In Benisek v. Lamone in 2011 the Maryland legislature needed to move about 10,000 voters out of the Sixth Congressional District to comply with “one-person one-vote.” It moved about 360,000 Marylanders out of the district and about 350,000 Marylanders in the district. As a result only 34 percent of voters were registered Republican versus 47 percent before redistricting.

Following the redistricting, Democrat John Delaney defeated the incumbent Republican by almost 21 percent. But two years later in 2014 Delaney almost lost his seat even though his challenger didn’t live in the district and raised less money. Two years after that, Republican Larry Hogan won the Sixth District, beating his rival by 14 percent.

A number of Sixth District Republicans sued alleging the state legislature “targeted them for vote dilution because of their past support for Republican candidates for public office, violating the First Amendment retaliation doctrine.”

In 2016, a three-judge court articulated a standard for when partisan gerrymandering violates the First Amendment. But two of the judges weren’t convinced that the challengers were able to demonstrate that but-for the partisan gerrymander, Republicans would have won and continued winning in the Sixth District. END_OF_DOCUMENT_TOKEN_TO_BE_REPLACED

If there ever was a case where the vote of only one Justice is likely to matter it is Janus v. American Federation of State, County and Municipal Employees. All attention was focused on Justice Gorsuch yesterday morning as the Supreme Court held oral argument in this case. And, he was…silent.

In Abood v. Detroit Board of Education (1997) the Supreme Court held that the First Amendment does not prevent “agency shop” arrangements where public employees who do not join the union are still required to pay their “fair share” of union dues for collective-bargaining, contract administration, and grievance-adjustment. The rationale for an agency fee is that the union may not discriminate between members and nonmembers in performing these functions. So no free-riders are allowed.

Why is only Justice Gorsuch’s vote likely at play in this case? END_OF_DOCUMENT_TOKEN_TO_BE_REPLACED

Congress created the Edward Byrne Justice Assistance Grants (Byrne JAG) in 2005 to provide “flexible” funding for state and local police departments. In April 2017 the Department of Justice (DOJ) required Philadelphia (and eight other jurisdictions) to provide documentation that it complies with 8 U.S.C. 1373, which prohibits states and local governments from restricting employees from sharing immigration status information with federal immigration officials.

Lozman v. City of Riviera Beach is a double redux. The Supreme Court ruled on this case in 2013 on a maritime issue. The Court agreed to decide the issue this case presents in 2011, but ultimately failed to rule on it then.

What if a police officer arrests someone in retaliation for engaging in speech protected by the First Amendment but the officer also had probable cause to arrest that person for a different, legitimate reason? In Lozman v. City of Riviera Beach the Supreme Court will decide whether that person may sue the police officer for violating his or her First Amendment rights. END_OF_DOCUMENT_TOKEN_TO_BE_REPLACED

If Attorney General Jeff Sessions has his way the answer will be yes he told the Senate Judiciary Committee shortly after two federal district courts temporarily prevented the third travel ban from going into effect.

The president’s March 6 executive order (the second travel ban) prevented people from six predominately Muslim countries from entering the United States for 90 days. In June, the Supreme Court temporarily prevented the ban from going into effect against those with a “bona fide relationship with a person or entity in the United State” until the Court could hear the case on the merits in early October.

The second travel ban was set to expire on September 24. That day the President issued a presidential proclamation (the third travel ban) indefinitely banning immigration from six countries:  Chad, Iran, Libya, North Korea, Syria, and Yemen. Persons from some of these countries and Venezuela also may not receive particular non-immigrant visas. Following the presidential proclamation, the Supreme Court dismissed the case challenging the second travel ban.

Shortly before the third travel ban was supposed to go into effect federal district courts in Hawaii and Maryland issued temporary injunctions blocking it.

END_OF_DOCUMENT_TOKEN_TO_BE_REPLACED

Perhaps the Supreme Court’s midterm has come and gone. The Court will only hear argument in 10 more cases and the term will end June 30. But the Court has issued decisions in less than half of the cases of the term so far. So now might be just the time to take stock of the Supreme Court’s term as it relates to the states. END_OF_DOCUMENT_TOKEN_TO_BE_REPLACED

The Friday before and the Tuesday after Martin Luther King, Jr. Day the Supreme Court accepted a total of nine cases, including a challenge to the President’s executive order allowing undocumented parents of children who are citizens to remain in the United States.

United States v. Texas will be heard this term and decided by the end of June. Oral argument will be held next term in some of the other cases accepted mid-January.

Four of the eight cases accepted, in addition to the immigration case, affect state and local governments.  While I will write more about each of these cases later, for now, below is a brief synopsis of them. END_OF_DOCUMENT_TOKEN_TO_BE_REPLACED

The Supreme Court’s 2014-2015 docket is now complete.  While the same-sex marriage and Affordable Care Act cases will receive the most attention, the docket is chalked full of cases significant to local government.  The State and Local Legal Center’s (SLLC) Midterm Review article summarizes all the cases accepted and already decided that will affect local government.  Expect decisions in all the cases by the end of June.  If you are interested in these cases and others register here for the SLLC’s FREE Supreme Court Midterm Review webinar held on March 5.

Here are some highlights:

Reed v. Town of Gilbert, Arizona and Sheehan v. City & County of San Francisco are probably the most significant cases of the term for local government.  Depending on how the Court rules, both could impact every city and county in the United States.  The issue in Reed is whether sign codes may treat some categories of temporary signs more favorably than others.  If the Court holds they cannot, virtually all local governments will have to rewrite their sign codes.  In Sheehan the Court will decide whether the Americans with Disabilities Act applies to arresting a mentally ill suspect who is armed and violent.

END_OF_DOCUMENT_TOKEN_TO_BE_REPLACED

And this blog’s own, Kira Klatchko.

This is just a small selection of the remarkable panel of speakers that IMLA and the State and Local Legal Center will feature at the Supreme Court Practice Seminar scheduled for March 4, 2014.  It will be a true “can’t miss” event. See the agenda and full list of speakers here.  Register here. And stay for the State and Local Legal Center’s 30-year annniversary reception, which you can register for here.

Be sure to check out details of the Supreme Court Practice Seminar that IMLA and the State and Local Legal Center will host on March 4, 2014. Lisa Soronen, executive director of the State and Local Legal Center, has invited some remarkable Supreme Court practitioners. It is a can’t-miss program for anyone intersted in the Court. You can register here.

Yesterday, in a move with significant implications for appellate practice, the U.S. Senate modified its filibuster rules to allow a simple majority to approve individuals nominated to serve on district and appellate courts. This is likely to have a direct impact on President Obama’s recent nominees to the D.C. Circuit: Patricia Millett, Nina Pillard, and Robert Wilkins.

Ezra Klein provides 9 reasons why the change is a huge deal as a general matter. And Steve Klepper of the Maryland Appellate Blog suggests that the change may also have a significant impact on circuit judges thinking of retiring or assuming senior status. See his post here.

The Third Circuit decided this week that installing a GPS device on a car requires police to obtain a search warrant. The case, United States v. Katzin, builds upon the Supreme Court’s decision in United States v. Jones, which held that placing a GPS device on a car is a “search” for Fourth Amendment purposes. Katzin addresses when that search is reasonable. The court considered various exceptions to the warrant requirement in other contexts, but concluded that none applies here. The court recognized that it was the first circuit to address this issue.

“They are not so much trying to get an answer from you as they are trying to demonstrate a flaw,” says Kevin Russell, a frequent Supreme Court litigant. “Sometimes they’re just picking on the poor advocate … or sending signals to other justices on the bench.”

The Federal Circuit recently said no, in a case highlighted today at Julie Tappendorf’s must-read blog Municipal Minute. In the case, the District of Columbia and the City of Houston attempted to trademark these two marks: 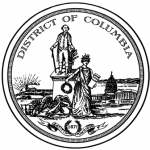 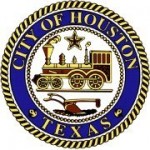 The court ruled that Section 2(b) of the Lanham Act ( 15 U.S.C. 1052(b)) prohibits the local governments from registering the marks. It provides:

No trademark by which the goods of the applicant may be distinguished from the goods of others shall be refused registration on the principal register on account of its nature unless it . . . [c]onsists of or comprises the flag or coat of arms or other insignia of the United States, or of any State or municipality, or of any foreign nation, or any simulation thereof.

The court rejected Houston’s argument that read in context, the statute does not prevent the City from registering its own seal. It also rejected D.C.’s claim that it may register the mark because of international treaty requirements.

What Kind of Appellate Lawyer Was Justice Roberts? The American Lawyer has an excellent article with that title. Here’s Roberts’s approach to oral arguments:

And then there were the infamous index cards. As he contemplated a case, Roberts  would write down all the possible questions he thought justices might fire at  him—dozens, if not hundreds. He’d organize them into four or five topics: A, B,  C, D, and maybe E. Then, he would shuffle them and fashion answers that would  make a smooth transition from, say, C to E to A. “You can’t guarantee the first  question you’re going to get is going to be on your first point. It may be your  third point,” he told Garner. “And it’s very awkward for somebody to say after  they answer the third point, ‘And now I’d like to go back to the point I was  making’. . .You kind of lose a little bit of traction.” Having thought-out  transitions at the ready, Roberts said, “makes the argument look fluid no matter  what questions you get.”

How To Write for Your Reader, a Circuit Court Judge. Raymond P. Ward has an interesting post about how Fifth Circuit judges are increasingly reading briefs on iPads, using a program that automatically turns all citations into hyperlinks. Ward says this will lead him to put his citations in the text, instead of in footnotes.

Over at Cities Speak, Lisa Soronen of the State and Local Legal Center outlines upcoming Supreme Court cases that could affect local governments:

For a full preview, register to hear from Tom Hungar, Kannon Shanmugam, and David Savage on October 22nd here.

SCOTUSblog has some interesting commentary on Town of Greece, a case that we previously addressed here.

Eric Rassbach says that those challenging the Town’s prayer practice have reached a “‘Hail Mary'” moment” where “facing imminent disaster” they “stake[e] everything on one desperate, final gambit:”

END_OF_DOCUMENT_TOKEN_TO_BE_REPLACED

Some fun items about the Supreme Court.

He turned his attention to the Supreme Court’s best writers.