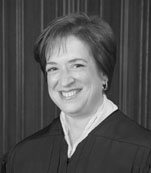 Kagan often opens a sentence with a direct invocation to the reader:

She uses a “generous sprinking” of informal and even colloquial diction:

She reaches for familiar similies and metaphors from outside the legal sphere:

Her parenthetical commentary “establishes a bond with a listener – a change of tone that suggests shared sensibility”: